Social media has certainly had a great influence on America, but what about one of America’s most celebrated days—Super Bowl Sunday?   Commercials have become as vital to the party as the beer and the company. 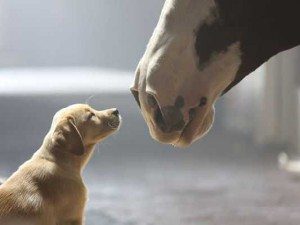 While it is hard to imagine a world without social media,  a few short years ago viewers were  only able to enjoy  Super Bowl commercials in the time allotted by the network.  Social media gives viewers a whole new way to experience the Super Bowl and its commercials.  It allows everyone to view the Budweiser “Puppy Love” commercial repeatedly, on their phone, their computers, and their tablets until their hearts are content.

Early releases and brief previews of what is to come is not the only way social media has had an effect on Super Bowl advertising.  Social media has given companies and consumers more than a two-way communication channel.  It, in some ways, has created a working relationship.  User generated content (content created by the consumer) for Super Bowl ads have become a trend that is powered by the forces of social media.  For the eighth year, Doritos will use a commercial not only created by the consumers, but also voted on by the consumers.  The “Crash the Super Bowl” campaign began months ago with viewers submitting their work and will finally come to an end when the lucky consumer’s commercial airs during the big game.

Social media can be an excellent tool to create a channel of two-way communication, whether advertising in the Super Bowl or not.  Companies have used social media campaigns to turn the previously passive viewers into active participants in the ultimate American sporting event.  Social media has allowed Super Bowl advertising to become more accessible and more tangible than ever before.

Check out some of the ads and teasers here: