Smartphones are ubiquitous. Everywhere we go, people are looking at their cell phones texting, surfing the web, playing an app, or just carrying  it in their hand to avoid the feeling of separation anxiety. Due to this obsession with our handhelds, more and more applications are introduced each year, and becoming so popular that they can join the New York Stock Exchange for hundreds of millions of dollars. One app, to be specific, that might be striking a $500 million deal is Candy Crush. 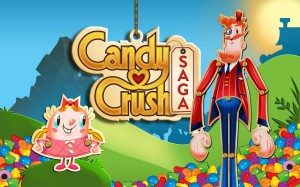 An application as simple as lining up three of the same colored candy is now being valued at $500 million. Though the download is free, the addicting game has options that players can pay for, whether it be opening the next episode of levels, or buying a cheat to help complete a level. These cheap offers raised $1.88 billion last year alone, and this past December recorded over 1 billion plays a day. Though the game is providing steady ratings and hits right now, investors are skeptical about putting money into the application, because they are unsure of its long-term profitability. The obsession stands strong for right now, but the future of an addicting app is very unpredictable. For example, other applications that seemed as popular and steady as Candy Crush, like Zynga, maker of Farmville and Words with Friends, or Doodle Jump, ran their course pretty quickly. They had their time to shine and were popular all over the country, however after a short time people got bored and stopped playing all together.

As the obsession with technology and handhelds continues, more and more applications keep becoming very popular and worth a ton of money. The other day, Facebook decided to buy WhatsApp for slightly over $16 million, as they continue to try and take over the world of applications. Though the owners of Candy Crush have not made any deals or decisions, their current valuation is extremely pleasing, and could potentially increase even more. Investing in applications is a risky area, as apps have proven to come and go fairly quickly. While Candy Crush might seem like the best new thing right now, by the end of this year it is possible that it is completely forgotten about.