College students like to party. It is a fact of life; however, most of the college age population fits the criteria for binge drinking.  We all know that copious amounts of alcohol usually results in a hangover; but what does it do to our overall health? 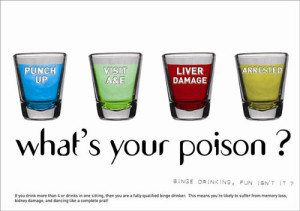 For those of you who don’t know, binge drinking is having five or more drinking (four for females) during a single drinking session. Binge drinking is technically drinking a six pack or a bottle of wine alone. As college students, we all know many people, even potentially ourselves, who can drink that amount of alcohol without seeming to be impaired. Because of the need for psychological and physiological standards for what is considered “drunk,” binge drinking criteria is seemingly low for the average college student.

Negating all accidents like personal injury or losing belongings, binge drinking can severely affect college students. As young adults, our superman complex is still lingering. We are “invincible”…..well until we lose a credit card or phone and then it’s tears and calling our parents.

Besides the occasionally lost belonging or dignity, it is what college binge drinking does internally that is the scary part. Heavy drinking by young adults can lead to metabolic syndrome a cluster of metabolic risk factors that increases the chances of developing heart disease, stroke, and type 2 diabetes. Also, it has been found that young drinkers, even those who only drinking once or twice a week, can develop severe attention and memory problems. According to one article, binge drinkers struggled more on attention and memory tests than those students who were not drinkers or were very light drinkers.

But what is driving this trend? Some have pointed towards the wide availability of inexpensive alcohol near campus, drinking games, energy drinks, and even the Internet culture. Honestly, no one can make us drinking. Yes, there is hazing, but that is NOT what I’m talking about. Students make the decision at the beginning of the night about how much they are willing to drink. For example, unless you want to get absolutely belligerent, why else would you download an iPhone drinking game app?

It is simply our current culture. Why is this our culture? Honestly, I couldn’t find a single article that could tell me why our generation is more accepting and encouraging of drinking. I am also not on any high horse. I’ll be the first say that as a college student I “technically” meet the criteria for binge drinking. If a drinking session can stretch over 8 hours and I have four drinks… then I meet the criteria. Most every student I know then meets the criteria. It is time for the criteria to change and to update because of the culture change that is being experienced.

Alcoholism and binge drinking are both horrible things and can cause destruction to us and those around us. But it is time for the criteria to be updated. What do you think? Am I alone in my honesty or are others willing to help set new standards so that 20 year old alcoholics aren’t lumped in the same group with individuals who might have four drinks over the course of a day?