The new app Yik Yak has now made it possible to post anonymous messages onto a feed that is publicly available to all users within a specific radius. Though the app is considered social media, it definitely does not serve the same purpose as say Facebook or Twitter, but it does share some similar elements.

What is the New App Yik Yak? 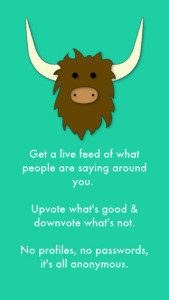 The new app Yik Yak is a feed composed of anonymous messages in the form of tweets, that viewers can either like or comment on. Upon downloading the app, you are immediately asked to enable the location services, in order to get connected with the different posts from people within a one mile radius of you. This app incorporates elements from Facebook and Twitter to create its function and format. Altogether, Yik Yak has now become a social media application to basically make jokes, talk badly about other people, or to just see what is going on around you. The difference between this cite and other social media cites is since your identity is anonymous and you ultimately have no profile, you also do not collect followers or friends. Also, there are no privacy settings to this app, allowing anyone in a one mile radius of you to see any of your posts freely.  Yik Yak is already becoming very popular among high school and college students, and has already proven to be raising issues regarding bullying among teens. Though the application makes all users assure they are at least 17 years old, there are no restrictions or rules regarding what you can post, and the themes are getting somewhat out of control.

Yik Yak has taken Facebook’s idea of “liking” and applied to the different posts users compose. Since the application does not offer any sort of identity and users cannot work to obtain a lot of followers or friends, this is its way of giving feedback to those who created funny or popular posts. Viewers can also comment and reply to posts, but everything is always kept anonymous.

Yik Yak also uses Twitter’s concept of creating a thread of random thoughts, as the display format of the new app similarly only shows the “tweet” like messages in a list. The feed is completely based off of what is going around in the location area you are situated, and different topics begin trending instantly. 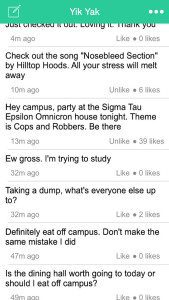 Last night’s basketball game marked the true start to the new app Yik Yak and its new significance at SMU. Throughout the game, users posted updates about the score and excitement, but also composed crude messages about different people in the crowd, fraternities, and sororities. It seems as if this anonymous app is being used as a way to bash others without getting caught, and it is only a matter of time until it is shut down.