In the era of texting, more and more users are developing the habit of multitasking.

Texting and walking has become such a common sight to see at college campuses, malls, and other public places. In recent years, the Internet has been circulating with videos of texters walking into objects in public due to their failure to walk and text at the same time. Three years ago, video of a women falling into a water fountain while texting became an overnight sensation. As shown in the video she seems clueless of her surroundings and engrossed in her texting conversation.

These types of incidents raise the question whether texting is getting in the way of people’s awareness of their surroundings. Of course many phone users are attached to their phones and would never give up their multitasking ways. While walking and texting can’t be stopped, there has been an idea that can help prevent these types of accidents.

Recently Apple secured a patent for see-through texting on iphones. This transparent technology will give iphone users the advantage of texting and walking at the same time while staying safe. This new technology may not guarantee zero injuries, but it can certainly help texters to multitask in public. The new technology would replace the usual white background seen in texting with a camera showing the texter what is in front of them. 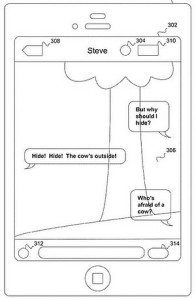 Many may view this invention as an encouragement to text more than ever before and a useful tool in any public setting while on the go. While others may believe that injuries are more likely to occur with more texting even with this see through technology. Either way, this ingenious idea hopes to be launched soon since Apple secured the patent just last week.

The inventors of this innovative idea highly discourage texting and driving while using the transparent technology. No concrete plans have been made on how the technology will be distributed and given to consumers of iphones but the technology has opened the endless opportunities of texting in different settings. Whether there will be safer or more dangerous texting habits following this invention are still up for debate.