Celebrity baby announcements, aided with the help of social media, have changed the way celebrities announce their upcoming bundles of joy, and rule the trending themes pages of Facebook, Twitter, and Instagram for days to come. The fascination with the celebrity lifestyle extends beyond the celebrity themselves, the public becomes obsessed with famous people’s whole lives, including their children and the sheer amount of time and information spent attempting to confirm a pregnancy is evident on many social media platforms. In a world of publicity and obtaining the world’s attention, celebrities have a myriad of ways their lives can become public fodder, but pregnancy might be the largest one.

On Saturday, April 7th, Cardi B confirmed her pregnancy on SNL and became a top trending topic on Twitter. However, the most surprising and talked-about celebrity announcement this year comes from Kylie Jenner. The youngest member of the Kardashian squad hid her pregnancy for nine months before confirming the many rumors by dropping a surprise video on YouTube. The video entitled “To Our Daughter” had 28 million views in 24 hours and currently stands at 65 million. Although the obsessive nature that fans follow these pregnancies heightened due to social media, the obsession with famous offspring is not new.

Print media used to reign supreme when it came to celebrity birth announcements. In 2008, People and Hello! Magazine paid $14 million for exclusive access to pictures of Brad Pitt’s and Angelina Jolie’s twins and Jennifer Lopez, and Marc Anthony received $6 million for photos of their twins. Magazines waged war over exclusive access to baby pictures because sales went up. Sales went up 60 percent for a Vanity Fair issue that featured Suri Cruise, the daughter of Tom Cruise and Katie Holmes. People magazine published an issue starring Shiloh Pitt, Brangelina’s daughter and their sales went up 45 percent. As more people leave print media for digital media and social media, the payout for exclusive pictures has diminished, and celebrities can now craft how they announce their pregnancies and strategically craft the messaging surrounding their children. 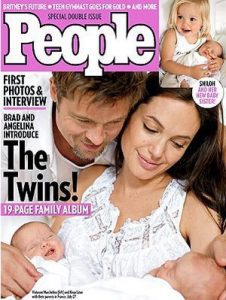 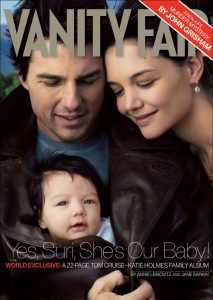 Social media has changed everything, and no information meant for public consumption has come out unscathed, including celebrity baby announcements. As the public moves from print media to social media, famous people should be even more mindful of covering up those baby bumps if they want to maintain their privacy.