Amazon has plans to announce an Amazon smartphone in June, that will be shipped out by the end of September.

They are preparing the release of a smartphone in the second half of the year. The main goal of this phone? Obviously to fight against the Apple iPhone and Samsung phones.

The have recently showed a few versions in San Franscico and Seattle in the past weeks. Amazon aims to announce the phone by the end of June and ship it by the end of September, Before the holiday season.

Well the biggest thing with the phone is that it will be capable of displaying three-dimensional images without glasses. the phone would employ retina-tracking technology embedded in four front-facing cameras, to make some images appear to be 3-D, similar to a hologram.

And what does that put in my mind? STAR WARS TECHNOLOGY 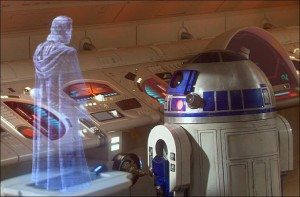 Hologram in the movie Starwars

What is the Goal?

The phone would thrust Amazon into a competitive market filled with big time players such as BlackBerry, Motorola, Apple, and Samsung. Unfortunalty, researchers have said there is little room for upstarts. But the Amazon name is pretty strong and has some fire behind them.

As of now, the design and pricing of the smartphone are unclear. The 3-D screen technology however is the big appeal and should attract a lot of new clients before the holiday season.

The other appeal of the phone, is to open up new avenues for mobile payments. As of now the market is dominated by eBay and PayPal, but Amazon is in the process of targeting a this market and continue their expansion. Because these consumers carry smartphones everywhere, Amazon would gain access to data crucial to their revenue in the smartphone world.