The “Gaga brand” knows its audience, markets to that audience and, hands down, it sells big. For example, Gaga even refers to her fans as her “little monsters,” something unique and different. This makes her fans feel included and that they are a part of her community, with she herself as the leader or “mother monster.” The Gaga brand is unexpected and odd, and her fans can always count on being in for a surprise whether its a new song or a concert performance.

Some also believe that her eccentricity is more than just a mere marketing tactic or publicity stunt. Her image and what she stands for is undoubtedly something to be taken into consideration. Lady Gaga associates herself and the Gaga brand with LBGT organizations and many social causes. Although I believe that Lady Gaga undoubtedly does support these issues on a personal level, her affiliation and connection with such social causes again, adds to the Gaga brand. This is one of the reasons many of her fans and followers identify so strongly with her and her music. 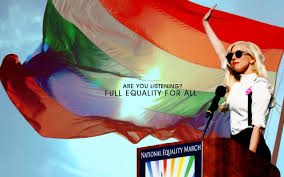 Lady Gaga has become a true icon in today’s world of pop culture. From dresses made of meat to grand entrances in an egg, the fame monster herself has truly created the Gaga brand. So, what can we in the marketing and communications industry learn from Lady Gaga? Dressing in funky costumes can definitely get you far, but it is most important to know your audience and tailor that brand to them.