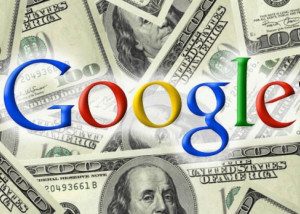 Ever wonder how Google affords to buy dozens of startups every year? Well, according to their first quarter earnings report released on Thursday, Google now has more than $50 billion in cash, up from $48.1 billion at the end of 2012.

Google plans to hold on to this massive stash of cash in order to pay for potential acquisitions and other technology investments that might boost future profits. Eric Schmidt, executive chairman of Google, explained earlier this week that he is personally not a fan of companies holding on to excess amounts of cash.

“What I really think about tech companies and cash is that there is a point where you have enough cash that you need to either start investing that stuff or lowering your prices. Simply letting the cash pile grow would be a missed opportunity for investment.”

But don’t mistake Google’s hoarding with them being shy to invest in infrastructure and acquisitions. In 2011, the company spent $12.5 billion to buy Motorola Mobility and it’s portfolio of patents. This willingness to spend money on risky companies and projects is an attribute that sets Google apart from it’s competitors, specifically Apple. Experts believe this is why Apple’s stock price has fallen to below $400, while Google’s has climbed to above $750. Investors see the breakthrough products that Google has very appealing.

Analysts think Google still has some problems to fix in the short-term, most notably the decline in cost-per-clicks, which declined 4% in the first quarter from 2012, but the rate of decline has slowed, suggesting that it is stabilizing.