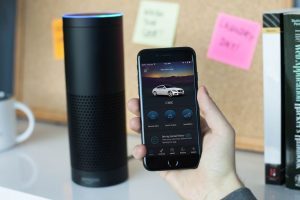 Mercedes-Benz is now equipping all of their 2016 and 2017 cars with Amazon Echo and Google home, ultimately expanding its smart home capabilities to the road.

The voice enabled assistant is capable of making to-do lists, providing real time information, ordering groceries, music playback, and much more. Mercedes-Benz is now adapting this luxury into their vehicles.

The addition has added a new meaning to the term ‘smart car.’ Drivers are now not only able to use voice commands for actions in the vehicle, but are also able to connect to outside of the car. Using the voice commands should decrease driver distractions, because a driver will not have to take their eyes off the road to use the feature. Mercedes-Benz drivers must activate a Mercedes me account, and also get a “mbrace” subscription. Using this subscription, drivers can connect it to their Amazon Echo or Google Home.

Voice commands in the car will differ from the commands used in the home. The commands are not completed entirely by Echo or Google Home. A voice command to the device must instruct the device to go through the Mercedes me app.

“Alexa, ask Mercedes me to start my car.”

“Ok Google, tell Mercedes me to start my car.”

Mercedes-Benz is not the first of carmakers to adapt the digital voice command system. Nissan announced they are adding Microsoft’s Cortana to their vehicles. Ford has also partnered with Amazon and plans to release the system in their vehicles this summer.