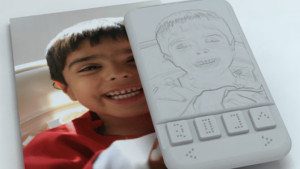 When we use our smartphones, it is hard for us to think about the fact that people who are blind cannot take advantage of the phone at all. However, technological breakthroughs have helped produce Braille Smartphones that can be used by the blind.

The phone uses a new kind of technology called Shape Memory Alloy. It consists of a grid of pins that move up and down to form Braille characters when an email or a text message is received. The entire message will be spelled out with Braille characters on this grid.

Previous forms of communication that the blind used for phones included voice commands, vibrations, and beeps. This new technology is innovative in that blind people can actually read what is being sent with Braille Smartphones.

Another innovative feature of the Braille Smartphones is the ability to receive pictures. A rough outline of the picture would be sketched with the grid of pins, allowing the person to feel the picture. Although not a main feature, this is just something else that would make blind people feel more connected to those they are communicating with.

Android released an app for smartphone users with very poor vision called Georgie. It featured larger fonts and voice command, both things that would help those with poor vision or even blind. However, the app costs $230 to download, which is a hefty sum for most people to pay.

How much do the new Braille Smartphones cost? They are expected to be released for an initial sale price of $185. That is cheaper than the Georgie app and most other smartphones for the blind currently on the market. Braille Smartphones are a new and innovative way to bring modern technology to those who previously could not use it.