On Thursday, April 25, 2013, all five living presidents gathered in Dallas, Texas to commemorate the opening of the George W. Bush Center. 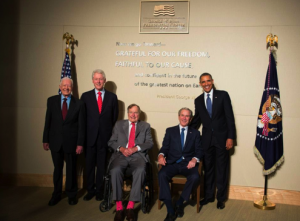 Presidents Jimmy Carter, George H.W. Bush, Bill Clinton, George W. Bush and Barack Obama, as well as their wives, were all on hand to celebrate the momentous opening of the Bush Center. Aside from President Nixon and President Reagan’s funeral, this is the first time that the five living presidents have appeared together outside of the White House. George W. Bush held a stag luncheon in 2009 to celebrate Obama’s inauguration with Carter, Bush, Clinton and Obama attending.
The Bush Center holds 200 million emails, 70 million pages of paper records, 4 million digital photographs, 50,000 audio tapes and 43,000 historical artifacts. The Bush Center also features a 9/11 memorial, replica of the oval office, the Presidential Library, museum, and the George W. Bush Institute.
SMU has been preparing for the Bush Center opening for several years. This week snipers and secret service were on campus as often as students were. In President Bush’s speech he noted that President R. Gerald “runs a fantastic university” and that SMU students “are awesome”. I can’t say that I disagree.
The Bush Center is open to the public on May 1st and April 29th for SMU faculty, staff and students.