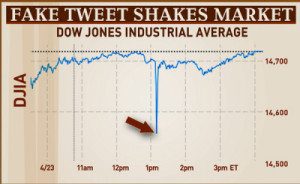 While most Americans believe the Internet and social media have made it easier to be well-informed consumers and citizens, many are still skeptical about the trustworthiness of the information they find there. And with good reason. On Tuesday, a fake tweet sent from the hacked Associated Press account sent the Dow Jones Industrial Average down 143 points.

At 1:07 p.m. the Associated Press tweeted the following: 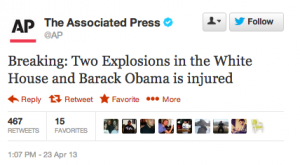 After dropping from 14,699 to 14,555, the Dow Jones Industrial Average recovered to 14,719 after the tweet was deemed to be inaccurate. The Associated Press issued a statement later that afternoon on their corporate website that said that the tweets coming out of the hacked account were false and that they were working to correct the problem as soon as possible.

A group known as the Syrian Electronic Army claimed responsibility for hacking the AP’s account, which is now suspended.

In the age of cyberterrorism and hacking, this story is very important. It embodies the significance of not undermining technology’s role in our tightly linked global markets. Security breaches, such as this one, show how financial markets are highly vulnerable when investors are so quick to trade on news.

Peter Donovan, an oil-options broker working on the floor of the New York Mercantile Exchange, said some traders quickly exited positions after the erroneous report of a terrorist attack. “That sort of stuff gets our attention, as you can imagine… but was immediately met with skepticism. You’ve really got to be careful in those moments,” he said.

So next time you come across “breaking news” via social media, always approach it with some skepticism and don’t trade on it without verifying its credibility.