Yesterday, Snapchat, a photo-sharing app, unveiled its biggest update to date. Many new and substantial features have been added to the app.  These updates seem have morphed Snapchat from a simple and easy single-feature app into a much more dense and complicated app.

One of the major changes included in Snapchat’s update is the interface.  The entire user interface of the social media app has ben redesigned including the icons, menus, and buttons.  Even the font has been change to a smaller and sleeker option.  The redesigned interface, however, is just the beginning.

The ability to text message is another prominent feature of Snapchat’s update.  Previously users could send a 45-character blurb along with their photo or video.  Users can now have full conversations with their Snapchat friends by merely swiping right on a username when on the inbox page.  Users are also able to share pictures through this messaging section of the app.  Users can take a new photo of themselves in traditional Snapchat fashion or use a photo saved on the phone’s camera roll.  This new photo feature is only available when messaging. 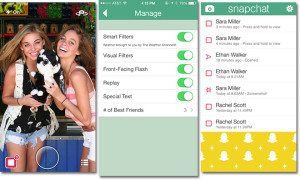 Users will still be unable to access photos from their camera roll when using the photo-sharing portion of the app.  Of course, these text and photo messages will delete but only after both users leave the screen.

Video chatting is another new feature Snapchat has added to the app.  This feature can only be activated when both users have the app open and are viewing that particular conversation. Like other video chatting mechanism, the snapchat update allows users to toggle between both the front and back cameras.

Many believed Snapcaht to be a fad that would eventually fade. However, it has been able to  stay relevant for some time.  These Snapchat updates seem to encompass (let’s be honest, cram in) many different and new elements.  Do you think this was an attempt for Snapchat to stay relevant in the eyes of the consumer? Or is this update the way of the future?