Whether we like it or not, we live in a world where it is more common to take a picture of our lunch than a picture of our family. It is almost expected of us to post on social media about whatever cool event we attended so that all of our followers can see how fun our Friday night was. Snapchat and Instagram Stories give users the unique ability to basically live stream every moment of their day. The two features seem identical, but there are a few small differences that set the two apart from each other.

Snapchat released its Story feature in October 2013. This new feature allowed users to post videos and pictures for their followers to view an unlimited number of times for 24 hours after the original posting. This is different from the initial purpose of the app. Before, users sent individual videos or photos to specific people to be viewed only once for a few seconds. The ever-evolving Story feature includes lighting filters, face filters, stickers, motion effects, drawing mode, captions and more. The most recent modifications gave the Story feature the ability to be searchable by content, created for specific groups and showcase specific “Geofilters” according to the user’s location. It is no wonder that Snapchat’s growth rate rose dramatically after the introduction of Stories. 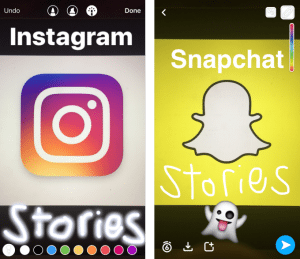 The impressive Snapchat growth rate dropped 82% in August 2016, according to TechCrunch. It is no coincidence that this decrease occurred at the same time that Instagram launched their Story feature. Snapchat and Instagram Stories serve the same general purpose. Instagram incorporated a few alterations that make it unique. An Instagram Story is composed of pictures and videos that are viewable for 24 hours. The feature includes many of the same aspects as Snapchat Stories. However, Instagram Stories offer the unique ability to direct the viewer to a chosen website, tag other users’ profiles, select different fonts for captions, “Boomerang” a video and modify stickers. On the other hand, these Stories do not have Geofilters, motion filters or content searches. The Instagram Story feature is quite a change for an app that was originally just used to post individual photos for followers to “like”.

The introduction of the Instagram Story made a large impact on the social media world. According to Forbes, 200 million people used the feature everyday by its eighth month. That number is compared to the 160 million daily Snapchat Story users at the time. When it comes down to it, however, it’s all about the user’s app preference. Snapchat and Instagram Stories aren’t all that different. Both features are helpful and fun to use whenever the need arises to share the exciting moments of every day life.