Presidential campaigns spend millions of dollars each year on radio and television ads, but for the 2016 election this money is a waste. Presidential Candidates must look to social media for rankings, free advertisement, analytic

More voters are receiving their news from social media and the 2016 presidential candidates are taking advantage of this medium. Social media is a tool for campaigns to reach out to Millennials and gain momentum in the polls and recognition in the news. Twitter has become imperative for candidates to use to gain the public eye and attention of potential voters.

One of the leaders in the republican GOP polls who has shown no bounds in social media is Donald Trump with 20.8 million actions and 8 million followers on Twitter. According to CNN, he and many other candidates have used twitter to attack other presidential candidates, including Jeb Bush, Cary Fiorina, Hilary Clinton and Bernie Sanders.

Twitter is not the only platform to look out for. Danzig the head of creative and delivery at Blue State Digital explained. ”Now, candidates have a presence on a whole breadth of platforms with custom content to target that audience, and they are producing unprecedented levels of content—the sheer volume is impressive (Adweek)”. Donald trump uses Instagram for his attack ads and posts his press releases on Twitter; Ben Carson has gathered 2.8 million likes on Facebook by regularly connecting to supporters; Hillary Clinton used Instagram to post personal images to feel more relatable to the public; and Bernie Sanders uses Twitter to promote his positions receiving 9.2 million actions.

Three mediums have changed the way politicians can connect with their voters and how voters view the candidates. The 1920 election introduced the radio. The nation could hear the presidential debates in their own homes- giving a voice to the candidates via radio. Politicians were no longer only on paper but could have a more relatable and intimate way to speak to voters.

The 1960s introduced television. Television gave candidates a voice and an image to it. The invention and popularity of television humanized candidates and focused on physical impression  and personal traits that had never been factors before. Kennedy was the start of a new movement from distanced politicians to celebritized leaders (Carr). 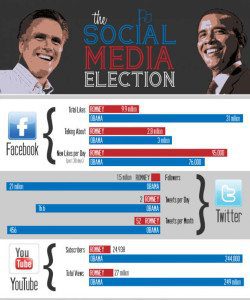 The 2008 Presidential election was coined as the ‘Facebook election’. Obama successfully used social media to gain an audience and following that ultimately elected him as president- “rocking the youth vote (Dutta)”. The introduction to this ‘Facebook election’ was only the beginning, setting the expectations for future candidates to market themselves online.

Twitter announced on Tuesday that its new feature enables political candidates to fundraise for their campaigns via Twitter directly. This will create a simple and quick way for impulsive backers to donate to their favorite candidates. Interestingly, this announcement was released the day before the Wednesday night Republican debate.

Let us know what you think! What platforms do you use to connect with your favorite presidential candidate?