Apple’s launch of the new iPhone 6 and iPhone 6 plus, has forced Samsung to lash out at Apple for “copying” their smartphone, the Galaxy S5.

Apple and Samsung have battled over the similarities with the competition’s products for years. However, this week, both Apple and Samsung dispatched new advertisements outwardly mocking the opponent’s smartphone device. 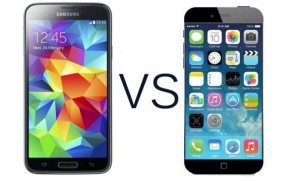 Apple’s new model is larger and better than before. It is a sleeker, bolder, and features a new rounded frame, which differs from the previous models. The new aluminum frame and upgraded sapphire-like glass has been implemented for upgraded durability. Although, the iPhone remains a fragile object. This device also includes a charger with the purchase of the phone. When compared to the Galaxy S5, the iPhone 6 comes out slightly lighter and a bit smaller. It does however, feature a finer viewing angel for its consumer.

Samsung’s latest product does not include a significant variety of upgrades from its predecessor, the Galaxy S4. Moreover, there appears to be a few glitches, including difficultly with the finger scanner and heart rate monitor. The product is made of plastic, which on the plus side, makes it virtually unbreakable. Conversely, the Samsung edition is not as appealing when compared to the iPhone. The Galaxy S5 offers better contrast ratio and can display an enhanced dark color scale than the iPhone. The storage capacity for the Galaxy is also superior to the iPhone because the Galaxy supports a microSD card that can hold up to 128GB of data. Furthermore, the battery life capacity is significantly improved with the capable of running up to 21 hours, versus the iPhone at 11 hours.

Although these devices possess a handful of similarities, Apple and Samsung have large differences when it comes to advertising. While Samsung spent 22.3 million on videos for the Galaxy, Apple put down zero for the iPhone and still managed to earn over 19 million views. Let’s just say Apple knows how it’s done. It certainly won’t be helping Samsung with the upcoming release of the Apple iWatch. Will Samsung have to step it up and create the “Galaxy Watch”? We will just have to wait and see!

And oh, even Ellen DeGeneres – the face behind the Samsung “Oscar selfie” is turning over to Apple. Sorry Samsung! Your move. 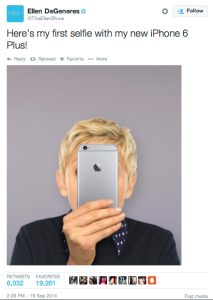