We live in a #hashtag world. There is no denying it. A single hashtag opens the door to hundreds of thousands of posts on the same subject. An Instagram caption is not complete without a few hashtags thrown into the mix. People in the wedding industry even make a profit off of helping couples create their perfect wedding hashtag. Brands use specific hashtags to attract more customers and clients. It might come as a shock, however, to learn that not all hashtags are allowed. A recent list of banned Instagram hashtags comes with consequences for users who include them in their posts.

It is easy to discover any post on Instagram by typing a hashtag into the search bar. Users can find posts about #puppies, #shoes, #cooking and virtually anything. This feature allows people to view posts that they normally would not see on their News Feed. It is a fact that posts containing hashtags have more engagement because they are easily searchable. This concept makes hashtags a prime marketing tool for brands and organizations. A common hashtag on a post can really help companies get their name out there. The new banned hashtags, however, throw a wrench into that process. 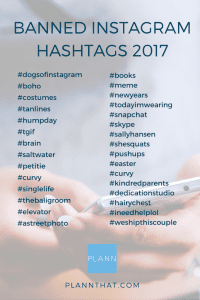 The massive list of banned Instagram hashtags could prove catastrophic for brands, companies and organizations that are unaware of what is and isn’t allowed. A post with a banned hashtag has a severely restricted ability for others to see it. The post will not appear in the Discover section of the app. Furthermore, any other hashtags attached to the post are rendered useless. A lack of knowledge regarding banned hashtags could lead to a post receiving a fraction of its potential engagement and reach.

The best way to avoid banned Instagram hashtags is to know about them. It is easy to stay up-to-date on what is and isn’t allowed. This knowledge could potentially mean the difference between success and failure for company. At the end of the day, it is just best to #hashtag wisely and know all the #rules.