Apps and platforms for social media are constantly changing and updating trying to become the next big thing, the one that is on the top of all the charts, and that is no different for the VSCO app. VSCO is a social media app that combines characteristics from apps such as Tumblr and Instagram and is slowly becoming more and more popular.

The VSCO App and it’s Evolution

Today’s generation is all about posting photos. People post photos about our lives, about our businesses, about our accomplishments and big achievements, and even about what food they are eating. The VSCO app caters to all of this by being solely about photos, with its users posting images about whatever they are doing, having the ability to follow others, and scrolling through their feed. Its motto is ‘to create, discover, and connect’ which appeals to social media users as well as business owners and influencers. Like most apps it is always evolving and has recently added an effect that is similar to Boomerang called DSCO but instead of short videos on loop, it posts stop motion pictures. The most used feature for this app though is its photo editing abilities. Some people even just use the app to edit instead of posting because it has so many quality features. 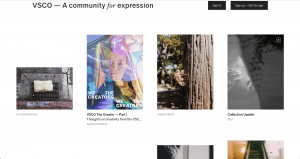 Something that sets the VSCO app apart from others is the fact that it is not about the likes or the comments or the number of followers that you have. This takes some of the pressure off , allowing people to post what you want as well as to post as much content as they want. These features are appealing not only to millennials but can also be useful for people trying to promote their businesses and show off their content. With a little more time and some more exposure VSCO could definitely become the next big thing, especially considering the fact that Beyonce uses it when posting social media of her own!