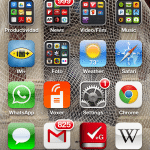 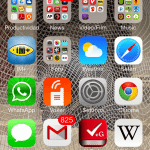 Owners of iPhone and iPad have been chatty in Apple-themed forums since iOS7 dropped. A source of complains about motion sickness, nausea, vertigo seemingly caused by the new parallax and zoom features in iOS7.

“Complete adaptation to environment means death. The essential point in all response is the desire to control environment.”

More than 200 million people who downloaded iOS 7 in its first few days of availability. What seems to be a representative sample are not delighted with a couple of aesthetic features: Parallax and Zooming.

To begin understanding the reasons behind them, it is necessary to understand “what on Apple’s Earth” does Skeumorphic mean? Designers and junior geeks should memorize this lingo.

Skeumorph: is a derivative object that retains ornamental design cues to structures that were necessary in the original. They are intentionally used to give new designs a comfortably old and familiar feel, or are simply habits too deeply ingrained to wash away. 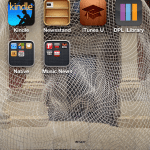 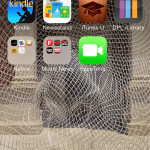 Skeumorphic design is beneficial to firms like Apple upon introduction of new technologies or inter-phases. The purpose has been to school consumers on how to interact with their touch-screen. They had to change intuitive gestures to be deciphered on screen, e.g. a pinching to zoom in on photos, or the inertial scrolling to glide naturally through a music library with just a finger.

Because iO7 has a flatter design, people think it is less skeumporphic than previous versions, but is it? The connection to semantic metaphors (meaning) are still there e.g. the native app for e-magazines and newspapers is still called “newsstand” and the one to buy content is still a “store.” Regardless the new OS is the start of a departure to new semantic territory. Yet “parallax” and its similarity to self-standing pieces of paper is more skeumporphic than “zooming” which humans cannot do without optical tools.

Parallax: is the apparent displacement of an observed object due to a change in the position of the observer. In iOS7 it is precisely the 3D effect the user gets when looking at the screen from irregularly low or high angles. This gives the optical illusion that the screen is multilayered. 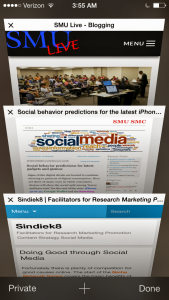 A recent technology podcast covered the visual evolution of the user inter-phase paradigm that iOS7 represents. The author of this blog took it “too seriously” and waited eight days after the release of iOS7 to update his iPhone5. The rationalized excuse was “waiting for the bugs to be cleared.” Fortunately the wait was positive since 7.0.2 provided a fix for another source of complains: the lock screen security bug.  Eight days after 7.0 was released on September 18, 2013 another user joins the “critical mass”. 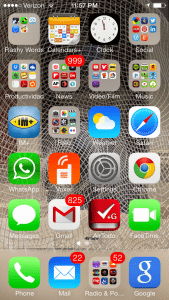 In reality the reason for waiting was a romantic excuse to hold on to the more skeumporphic design of iOS6. Gaudy as it is considered by some, it provided an entirely dizzy-free experience. On the other hand, while gate keepers and decision makers in Cupertino may be attentive to some listening posts, spending too much energy complaining about parallax or anything else may be unproductive. They will be changed when/if it is convenient to Apple’s overall global strategy. The zoom feature, for instance, cannot be mitigated for now. And why would people make a fuzz and threaten to downgraded back to iOS6? Desist, adapt, embrace, and continue a meaningful existence in holly gadget hoarding. 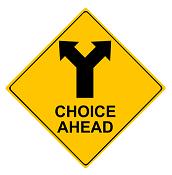 For headstrong iPhone users the solution to disable the parallax effect is as easy as: Settings> General> Accessibility> Reduce Motion> Toggle off. Cinch!

Perhaps people can take the kvetch factor down one level?

For power users, maybe a more compelling reason to “reduce motion” is the fact that “the Parallax,” like most iPhone features, uses up battery. All others, parallax thyselves away!