“Update to iOS 7 and become waterproof” claims the ad (see picture below) explaining that “In an emergency, a smart-switch will shut off the phone’s power supply and corresponding components to prevent any damage to your iPhone’s delicate circuitry.” 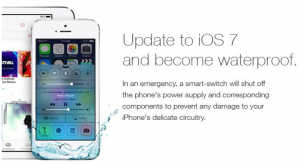 By using authentic-looking ads and a  fake Facebook post from Apple CEO, Tim Cook, these pranksters have managed to convince an unfortunate amount of people that the new iOS 7 feature will make their phones waterproof.

The prank originated from popular online forum, 4chan and quickly spread to various social media outlets. Twitter users joined in on the fun and began spreading the word of this “new feature.” In addition, Tumblr users with an actual waterproof phone case posted videos of them submerging their phones to help add to the credibility of this prank. The gullible bunch that fell for this hoax took to Twitter to express their extreme displeasure. One user wrote: “Whoever said iOS 7 was waterproof **** you.” Another wrote: “OK whoever said iOS 7 is waterproof GO **** YOURSELF.” Although 4chan has a an extensive history of pranks, this might be the best so far.