The world of social media is competitive. It is hard to get ahead, and stay ahead, with so many different platforms. The competition does not seem to faze Snapchat. Numbers don’t lie, and the latest numbers show us that Snapchat teen usage is at an all time high. Why are so many teens choosing this platform over all others? Can the company maintain their success, or is it simply 15 minutes of fame? 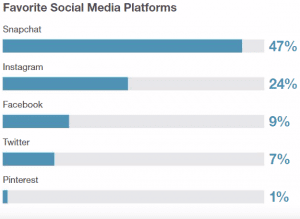 Every social media platform is unique. Instagram offers users different features than Facebook. Twitter offers users different features than Snapchat, and so on. However, most of them are similar enough to compare. A recent study by Piper Jaffray compared the various platforms and found that Snapchat is the most popular among teens — by quite a margin. The study, conducted bi-annually, states that, “Snapchat is the preferred social media platform for 47% of teens using the platform — up 12% year-over-year.”

The impressive Snapchat teen usage numbers do not come as a shock. The company has been on top since early 2016. In early 2017, an astonishing three billion photo and video “snaps” were published daily. However, the company’s winning tactic is their focus on user engagement, rather than user numbers. Snapchat recently released a study that discovered that their users spend an average of 40 minutes per day on the app. This is striking compared to the 32 minutes per day that Instagram users spend in-app. Engagement rose dramatically with the introduction of Snapchat stories, filters and Publisher and Entertainment stories.

How to Keep the Lead

Despite their continued success, Snapchat is not in the clear.  The company has even more competition with Instagram and Facebook’s Story features. The competition between different platforms could decrease Snapchat teen usage. The next step for Snapchat is to ensure that these teen users remain engaged and responsive to ads. Advertisement influence turns user engagement into profit. The company can remain one step ahead with successful advertisements. Unfortunately, this has been a problem for them over the last year. The large decrease in the Snapchat market value serves as proof. Instead of basking in victory, it is important for Snapchat to adjust their focus on turning ads into revenue. This will ensure continued success rather than stagnation and eventual decline.