McDonald’s—the fast food establishment you never stop hearing about. Everything from the big yellow arches to the enchanting Ronald McDonald making children go crazy to get their kids meals, all are some of the most prominent symbols around the globe. Recently, however, McDonald’s turns to Grant Imahara, former co-host of “Mythbuster’s”, to raise their reputation and eliminate the negative connotation.

Mythbuster’s is a group of experts that test controversial discussions to get a factual answer to settle most any debatable topic. Imahara will appear in a series of videos that with reveal if the rumors of McDonald’s products are true or not. The first test was the beef that is used in McDonald’s burgers. According to Fox News, the beef is “100% beef trimmings, no eyeballs or lips.” 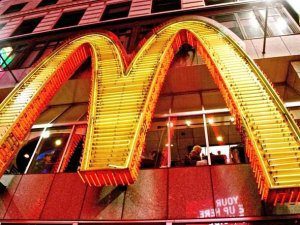 McDonald’s, the largest fast food chain, serves roughly 68 million customers daily, has been in the dog house, via news and social media, for controversies regarding its food products and services. Bugs, fingernails, by product slime, to fake beef have all been topics putting McDonald’s on the chopping board for the quality of food it sells. McDonald’s has turned to its social media platforms to reach out to the haters, by tagging the users and responding respectfully towards the outspoken negativity. This campaign has thus far been a success in attempts to address quality concerns, and McDonald’s has plans to continue responding to questions via its social media sites, including Facebook and Twitter.

This isn’t just a quick fix, McDonald’s aims to remain transparent and honest with its customers going forward. Employees are willing to answer any and all questions, whether they are positive or negative. The large company plans to open further restaurants around the world and cater to all customers and employees in the best possible fashion.

With the world’s largest distributor of toys, bringing in over $24 billion in revenue, McDonald’s

definitely has the means to make the necessary repair to its reputation. According to Forbes, in 2003, McDonald’s stopped using the “pink goop” for their chicken nuggets and instead have turned to chicken products. Furthermore, McDonald’s burgers have been proven to use real beef products.

Imahara’s videos have not yet aired, however, they will launch on Discovery Channel in the new few months.