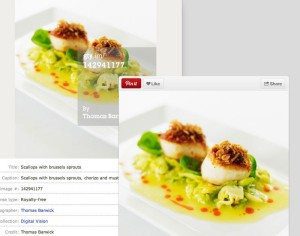 Pinterest partners with Getty Images in hopes of improving search results and to obtain more accurate data on what Pinterest users pin to their boards. Getty will provide Pinterest with shared data and accurate attribution to where the pictures came from for an undisclosed fee.

Pinterest hopes that its partnership with Getty will help describe and sort pins that have been uploaded by Pinterest users with little information. As the site grows, Pinterest believes that providing complete and correct information to its users has become its new financial purpose, as the company was just valued at $3.8 billion.

“Their collection not only includes great images but also data about each image. This can include who took the image, when, where, and what’s in the picture. We think this will be really valuable, especially when pin descriptions and links are not as helpful as we’d hope,” said Michael Yamartino, Pinterest product manager.

Not only will Pinterest’s partnership with Getty images improve the data provided to users, but it will also play an important role in Pinterest’s plan to soon implement advertising. By collecting better data on its pictures, Pinterest will be able to better target what users are interested in by having a better understanding of the types of photos users are pinning to the site.