Many businesses profit from advertisements on social media platforms. Almost all social media ads are specially tailored to each user. Facebook, Snapchat and Instagram frequently post and publish paid ads in order to generate revenue. A new name officially deserves to be added to that list.Twitter launched promoted tweets today for public beta in the US and the UK. The monthly subscription fee is the only caveat.

What is Promote Mode

“Promote Mode” is Twitter’s first ever ad subscription tool. After paying a fee of $99 per month, users in the United States and the United Kingdom gain access to the service. The concept is simple. Once subscribed, users compose informative, clever tweets as they normally would. Then, the tool sends out the tweets and user profiles to strangers’ timelines. As a result, the tweets generate increased engagement and revenue. The only thing different about the ad tweets is the small “promoted” label. Promote Mode drastically boots exposure and diffuses information to non-followers. 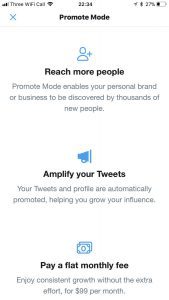 Twitter launched promoted tweets with a specific target audience in mind. The self-service advertising tool is ideal for small businesses, bloggers or anyone else who does not have the time, energy or funds to launch full-scale ad campaigns. The company stated that, on average, accounts will reach 30,000 additional people and add 30 followers each month. That kind of exposure impacts small businesses in a big way. 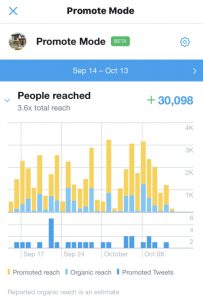 Twitter designed Promote Mode for mobile use. Once in the app, the Promote Mode tab appears in the Twitter menu drawer.Users can turn the tool on and off as they please. The feature includes the ability to see the number of followers gained and the number of views the tweet received. Futhermore, users can even see how many people viewed their profile as a result of the promoted tweet. This analytical information is crucial in todays’ digital world. One drawback, however, is the fact that users can’t select which tweets to promote. On the other hand, users select five interest locations or regions in the desired country.

All in Good Timing

The news that Twitter launched promoted tweets comes at an ideal time for the company. Twitter just released their optimistic Q3 earnings. The company recently gained 4 million users. The only thing lacking for the company was ad revenue. Promote Mode could be the company’s profit making solution.