Andres Meira and tech investors in Silicon Valley have recently come out with a product that could save thousand of lives. It is called the Grillo, the Spanish word for cricket.

This product is an earthquake alarm that could save thousands of lives. 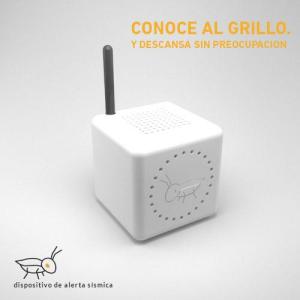 Earthquakes have caused major devastation for a while. In September 1985, an earthquake measuring 8.1 occurred in Mexico City killing 10,000 people and leaving parts of the city in ruins. In 2010 a 4.5 earthquake hit Haiti causing many deaths and residents and commercials buildings to collapse.

After these earthquakes, Meira decided to move to Mexico City after working in Haiti because, “It’s an experience that had a profound and lasting effect on him.”

Now, after much research and partnering with the top engineers and tech investors in the world, Meira believes he may have a solution that can save thousands of lives.

The Grillo is a compact device, a cube about the size of an alarm clock, that taps into special frequencies that SASMEX operates on and relays that information to its users. When seismic activity is detected, the Grillo sounds a loud, flashing alarm. And the best part about it is it’s only $50.

“This is the most affordable and most direct way for the Mexican public to connect to the early warning system,” Meira said of the product.

Meira hopes the Grillo system could be introduced elsewhere in the world where earthquakes are a real risk. This includes Nepal, India, the West Coast of the U.S., and along much of the Pacific Coast of South America.