Kyle Ayers, a New York based comedian, saw the benefits of live tweeting and utilized it in a way that has created a buzz about privacy. 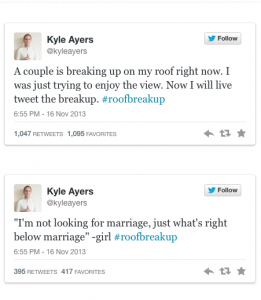 “A couple ran onto my roof and starting breaking up, right in front of a bunch of people who were just up there hanging out. I live tweeted the breakup,”

Using the #roofbreakup Ayers was able to attract attention, and even gain a following, to the couple’s private argument. But this raises many questions in regards to how much privacy people are entitled to when having a discussion in public. Ayers’ #roofbreakup was obviously supposed to be a fun use of the live-tweet as well as a surge of funny tweets, but we must ask ourselves how we would feel if we were Rachel. The poor girl has just gone through a breakup, with someone too busy “chain-smoking” and “work-texting” to care (#teamrachel), and unbeknownst to her this separation was insensitively tweeted for anyone with a smartphone or computer to read.

Should Ayers have used a little discretion and respected the end of a love affair? Or was Ayers in his natural right to broadcast what is arguably a comedic moment in a public place (i.e. on a rooftop in Brooklyn)?

It is my personal opinion that as a society we are beyond the point of expecting anything we do in public to be safe from the internet. If I choose to have a dramatic break up with my boyfriend in the middle of the mall, you better believe I would not be surprised if to later find a youtube link to a video of my breakup in my inbox. Ayers may not have intended for his live tweeting session to raise a question of personal privacy, but his now viral #roofbreakup proves that no one is safe from the man tweeting in the shadows.

To Judge The Live Tweets Yourself Go Here.