Instagram appears to be back at it with a new screenshot attribute to accompany the latest update. Users now get notifications when people 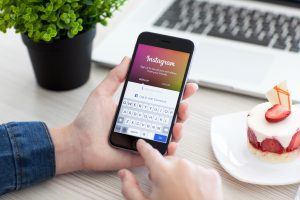 take screenshots of their pictures, but it’s not what you might think.

After news emerged that Instagram users will be notified when someone screenshots their posts, fans of the photo-sharing hub went into a total frenzy. However, if you read the fine print, it might not be time to freak out just yet.

Turns out you will only be able to screenshot temporary pictures and videos through the Instagram Direct portal. What’s even more comforting is that screenshot notifications will only apply to messages sent using the app’s new disappearing photo function. Other users will not be notified if someone takes a screenshot of a photo or story they posted for all of their followers to see. 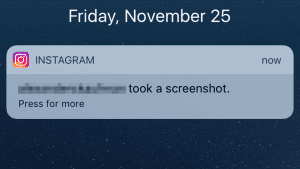 A screenshot notification on the Apple iPhone.

Everyone can take a deep breath and be comforted in the fact that their Instagram snooping can continue without any road blocks. Bottom line is the new feature will essentially embody what happens if you screenshot a Snapchat.

But that’s not to say that Instagram is in the clear.

This is the second attempt the social networking empire has made to beat Snapchat at their own game. The digital media juggernaut first ripped off Snapchat with the release of Instagram Stories this past August. Now with the new screenshotting function, it seems like it’s about time the popular app came up with some new material.

Aside from the copycat syndrome that’s running rampant across social media platforms, there may be more important issues at stake. Although the feature strikingly mirrors Snapchat Stories, some argue that the app hasn’t been doing enough in terms of privacy. Many claim the new update is actually a step in the right direction for Instagram. By alerting users when someone is attempting to capture personal data, people will hopefully be more careful about what they send out and to whom they send it to.

However, does that mean Instagrammers wanted a change in the first place? It’s hard to say how people will react when they know all the provisions of the screenshot function. At least users can continue to do what they do best—for now.