Last weekend, the Auburn versus Alabama game was one for the ages. The already heated rivalry produced an exciting, close game that eventually ended with Auburn coming out on top. In the end, a botched field goal was returned over 105 yards for a touchdown and the win. While social media made it easy to follow the game play-by-play, it also showcased one of the darker aspects of technology: the opportunity for easy, senseless bullying. 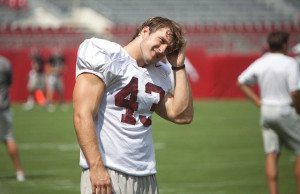 Cade Foster, the Alabama kicker, missed three field goals throughout the course of the game. This lead to Coach Nick Saban going with the backup kicker for the last fateful, game-ending kick. Subsequently, as the game ended, Foster began receiving many unpleasant tweets. So many, in fact, that he would end up blocking out his name and picture on Twitter. 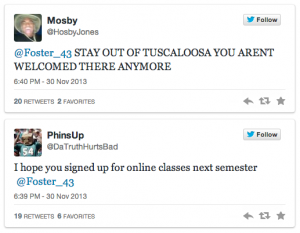 This instance reveals a troubling aspect of social media. People feel that they can make drastic, offensive comments with no repercussions. A boy who is no more than 21 years old misses a few field goals in an athletic match, and he receives death threats?

Although many people, including his teammates, came to his defense, it’s time for us to take a step back and analyze where we are as a society. While the internet makes it easy for us to share our opinions, it is important to remember that bullying is never acceptable.