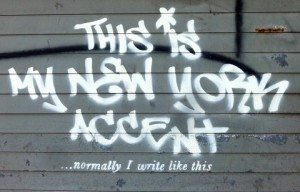 Mysterious British street artist Banksy known for his satirical street art and subversive epigrams combine dark humor with graffiti done in a distinctive stenciling technique. Earlier this month, Banksy announced his one month residency in New York via his blog simply stating “For the next month Banksy will be attempting to host an entire show on the Streets of New York.” His exhibit “Better Out Than In” features artwork on buildings, statues, and live works of art. Banksy, debuts one piece of art a day and completes pieces late at night. Generating huge media attention and buzz, Banksy implemented social media to share his work through social media.