Vine has introduced the app’s first major update since its launch in January of this year. The changes, announced on the company’s blog last week, give users two new editing options: Sessions and Time Travel. The app has traditionally only allowed the recording of six second videos, so the Vine updates will present new opportunities to users. 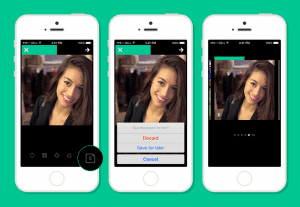 Sessions works as a “safe draft” tool, allowing users to save up to 10 posts to work on when they so please. Sessions can be saved and opened within the camera function of the app, giving users more freedom to shoot clips in different locations for the same post.

With Time Travel, shots can now be reordered, replaced, and removed within a post – but not from post to post. The organization is made simple by tapping the green bar at the top of the camera function.

When creating Vine, developers decided to include only what was necessary to capture “life in motion and share it with the world,” with few nods to traditional film making. Veteran users have expressed concerns that the new Vine updates take away from the simplicity that Vine was striving for from the get go. They also say the new functions remove the necessity for creativity and originality to make an outstanding six-second video.

Ironically, the changes are too extensive for the company to post a Vine effectively demonstrating how to use the new updates.

The new Vine updates could have been made in an effort to compete with Instagram, which recently added an update allowing users to use videos from their smartphone’s library.

What do you think? Is Vine attempting to give users more options so they have a leg up on Instagram? Will Vine ever be able to compete with Instagram without a photo component?