The popular use of streaming has made album sales at an all-time low in the United States. These streaming devices include Spotify, Soundcloud and Vinyl. Everybody believes that streaming is the future, but major artists are pulling out of streaming services. As of now, the future of the music industry is hard to predict. 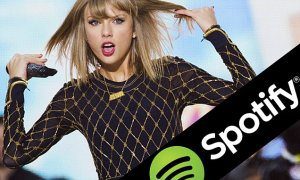 This past week, Taylor Swift made the decision to pull out of Spotify, the popular music streaming service that has 40 million active users. With the recent release of her album “1989,” Swift is arguably music’s most popular artist at the moment. Swift’s move to pull out of Spotify was very risky, but because there was no legal option other than buying, fans obliged. This moved boost her sales to 1.3 million units in its debut week.

Spotify claims that over 70% of their sales go to artists, but, depending on the artist, only $0.006 and $0.0084 is paid for each play. Because of this, many other artists have pulled out including Thom Yorke and The Beatles.

Although the future of music is hard to predict, one thing is for sure: “Streaming is the way of the future,” said Soundcloud’s Eric Wahlforss.