Say goodbye to the Pinterest like button. In an effort to differentiate itself from other photo-driven social media platforms, Pinterest is eliminating it’s like button. Earlier this week, Pinterest said pinners did not notice a difference between liking and saving pins. So, pinners saved pins instead of liking them. Pinterest’s research discovered removing the like button made pinning easier for users like you. 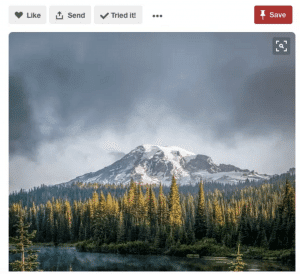 Since its inception in 2010, Pinterest put two different ways for you to interact with pins; liking or pinning. Liked pins went to a tab on your profile page, not a specific board. Pinned pins go into category-specific boards you created.

Recent research showed most pinners never fully comprehended the Pinterest like button. The selected pin was saved to your profile, whether you liked it or pinned it. The only difference is the pinned pin goes to a board.

Saving your pins allows you to organize them categorically or thematically. You could easily search for a specific pin later within a board. In addition, Pinterest will suggest aesthetically similar pins for your viewing pleasure. Your Pinterest experience won’t feel different after the like button’s retirement.

Since Facebook’s immense popularity and reach span beyond other social media platforms, this is an unfair comparison. Pinterest and Facebook are completely distinct entities. As a Pinterest spokesperson put it, “We like to say, be yourself and not your selfie.” The same Pinterest spokesperson focuses on Pinterest’s “virtual discovery” for users. This means you explore ideas to implement in your life, like a decorating idea for your daughter’s first birthday party or the best way to pack for your weekend vacation in the Hamptons. As a result, you have a personal database of ideas.

Comparatively, Facebook’s appeal comes from posting about what you’re doing or feeling now. You can post pictures, share your feelings and opinions, or receive updates on your favorite band’s tour. Pinterest allows for abstract ideas to become a reality, while Facebook shows only reality.

What happens to all of those liked pins? Worry not. All of the pins you’ve previously liked won’t disappear. Pinterest’s system will automatically create a separate board titled “Your Pinterest Likes.” You can move them to specific boards from there.

With all of this said, let’s join Mr. Timberlake in bidding the like button adieu. Bye, bye, bye.