Last Saturday, at the Kentucky Derby, the world’s largest 4K video board was revealed. This ultra-high definition board has an active display area of 15,224 square feet, which will greatly improve the fan experience. The name “Big Board” is definitely fitting for such a massive screen.

With a cost of $12 million, “Big Board” stands at 170 feet wide and 90 feet tall and weighs 1.2 million pounds! The screen is about 50 feet higher than the grandstand’s Twin Spires and can withstand up to 90 mph winds. Also, 750 new speakers were installed throughout the grounds so that everybody could hear what was being said on the screen. 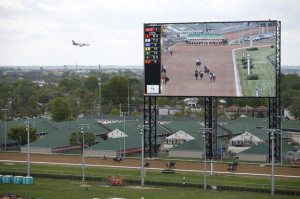 “Big Board” in Action

Construction on this state-of-the-art video board started back in December. Churchill Downs worked with Panasonic Enterprise Solutions Company to get this gigantic board built just in time for last weekends Kentucky Derby. According to CBS D.C., “Big Board” is “bigger than three NBA basketball courts, [and] bigger than the screens on the monstrous four-sided display at AT&T Stadium, home of the Dallas Cowboys.” “Big Board” is precisely 11 feet wider and 18 feet higher than the screens at AT&T Stadium. With a screen so large the horses appear to be around 70 feet tall on screen! That is more than 10 times their true size! 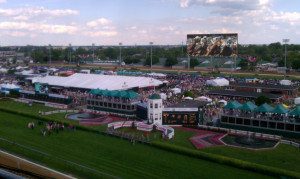 Also, here is a link to a time lapse video of the Big Board Construction 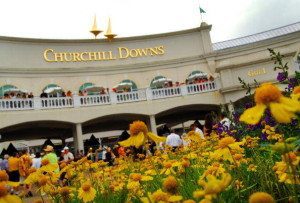 Churchill Downs on the day of the 133rd Kentucky Derby

According to a statement by Churchill Down Racetrack President, Kevin Flanery, “more than $27 million will be spent this year to make Churchill Downs one of the premier sports and entertainment venues anywhere in the world.” With “Big Board” already being a huge success last week, we will have to wait and see what else is to come at Churchill Downs.