Just when you thought Arcade Fire couldn’t get any more psychedelic, some geeks stepped in to make a video experience that would make John Lennon blush. Creators at Google have designed a platform with an interactive short film for the band’s song “Reflektor,” allowing the audience to manipulate videography using a smart phone and a computer.

The video, found at www.justareflektor.com, uses Google Chrome and smart phone devices to allow users to create a unique visual experience. After going to the website, the user is prompted to enter a five letter code in the same website on a mobile device. The phone then connects to the computer, and by tilting the angle of the phone screen, the user controls an affect on the image. When the video starts, the story of a young girl in Haiti unfolds while the user illuminates, distorts, fish-eyes, shakes, or runs moonbeams over the film. 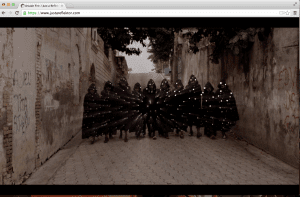 Inside the “Reflektor” video experience hosted by Google Chrome

Using words like “gyroscope” and “accelerometer,” the Canadian Google techies explain how the project came to life in this video. They explain that the entire idea is an experiment in itself, and that’s exactly what they want the audience to do as well; experiment to forget the connection between themselves and the video in order to get lost in the experience.

With MTV shifting its focus to the Jersey Shore and Vevo becoming the most prominent method for artists to share music videos, the Reflektor project could open doors for the music industry to reintroduce the importance of video media into music. The future could lie in allowing fans to create and manipulate art in order to interact with their favorite song or artist.