Dealing with billions of dollars will get a lot of people talking and Facebook’s pricey buyout of $19 billion for WhatsApp is no different. If you were ever wondering what is worth that much money, we have your answer: a hot mobile messaging application.

So what’s up with WhatsApp? At the small fee of $.99 once a year, the application allows users to bypass the need to pay wireless carriers for messaging services. Instead, the application uses your Internet data plan to send texts, pictures, or videos back and fourth.

So why does Facebook care enough to dish out a cool $19 billion? In just four years WhatsApp acquired over 419 million users, that is something no other company had done – not Facebook, not Gmail, not Twitter, nor Skype. In fact, Facebook only had 145 million users in their fourth year, which is almost 35% less than WhatsApp. These users are essential for Facebook to gain in order to be a top competitor in social networking abroad, which is where Facebook has been lacking. Just look at the study conducted by Jana Mobile, which revealed that in large developing markets such as India, Indonesia, Brazil and Mexico they all listed WhatsApp before Facebook when it came to the messaging application they used most often. Acquiring this company would do wonders for Facebook’s presence for messaging abroad (not to mention it would take out their top competitor). 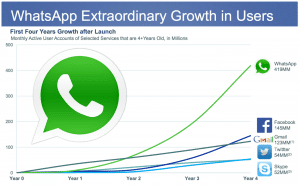 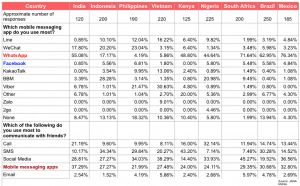 The findings to the question: Which mobile messaging application do you the most? Look at where WhatsApp falls compared to other applications.

In the international message market, WhatsApp has become a force to be reckoned with, which is exactly why Facebook had to pay a pretty penny to acquire the company. Because of WhatsApp, international texts no longer mean $1.00 per text and instead the messaging application has saved people hundreds of thousands of dollars internationally. With 450 million users and 315 million of them active on any given day, WhatsApp is a leader in mobile messaging that is forever shaping the way we communicate.

To expand their social network’s global reach, Facebook had to dish out big- in fact, it was their biggest acquisition to date. They agreed to pay $4 billion in cash, $12 billion in Facebook shares, and an addition $3 billion in restricted stock for the WhatsApp employees and founders.

The hope is that joining between Facebook and WhatsApp will accelerate growth and more users between the two companies. Together, they hope to work towards connecting the world through Internet services and become the leader in messaging.  As the acquisition begins, it will be very interesting to watch on to see how both companies are affected and the financial outcomes.

The hottest messaging application that is shaping the way we communicate

1 thought on “Facebook Pays a Pretty Penny of $19 Billion”