Is Crowdfunding the Future for Startups, Artists, and Entrepreneurs?

Crowdfunding is one of the newest and fastest growing trends on the Internet.  By definition, it is the practice of funding a project, typically via the Internet, by raising smaller amounts of money from a larger number of people.  Crowdfunding has enabled millions of people to contribute money to turn conceptualized products and projects into reality.

Crowdfunding generates capital and showcases individuals’ ideas to the world and allows for their potential success.  There is no limit to the ideas proposed, and projects range in category from movies to technology. There are hundreds of crowdfunding platforms, with more that continue to pop up daily.  These platforms allow for  individuals to ask for or contribute money to specific projects.  Each site has a slightly set of  rules and regulations.  In most cases, those who gave to the project will get some sort of negotiated payment.  Some of the most popular sites include Kickstarter, Indiegogo, RocketHub, and Crowdfunder. 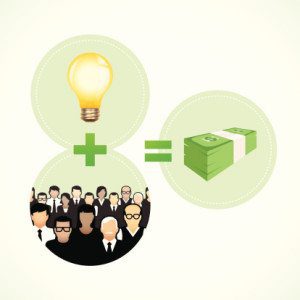 Kickstarter, the world’s largest funding platform for creative projects, has helped to launch more than 58, 000 projects within the last few years.  Kickstarter has had many notable celebrity crowdfunders, since it began in 2009, including Spike Lee and Zach Braff.  More recently, approximately 91,000 fans of the cult television show Veronica Mars contributed about $5.7 million to create a Veronica Mars movie after Warner Bros opted not to fund the project.  The movie was the fastest project to reach $1 million and $2 million on Kickstarter.  This crowd-funded project was the highest funded project in the Kickstarter film category and the third highest funded project in Kickstarter history.  The Veronica Mars fans showed their true devotion the show which was evident when the   project reached the largest number of backers in history.  The movie premiered in theaters and was released on iTunes on March 14 to positive reviews.

Do you have a great idea but not nearly enough money to execute it?

Why not turn to crowdfunding?  It allows for artists and inventors to bring to life ideas that without the added pressure of finding backers.  It allows one to tap into a community of potential users to not only contribute money, but also give feedback and input before the product is produced.  Crowdfunding is a great way to turn ideas into a reality and will surely be a prevalent trend in upcoming years.

1 thought on “Crowdfunding Turns Your Ideas Into Reality”