It is no secret that people like creating cartoon versions of themselves. Previous examples of this trend are the Sims videogame, the Mii feature on the Wii console, caricature drawings at a carnival and so on. Currently, the most popular trend in custom cartoons is Bitmoji. Bitmoji became so popular, in fact, that in 2016 it teamed up with Snapchat to further personalize users’ snaps.

However, the newest update on the avatar craze comes from Facebook. New technology has been created that can generate custom Facebook avatars for you simply by taking a picture.

One of the most frustrating aspects of creating a personalized avatar is getting the features just right. It might look just like you except for the nose, skin tone, facial hair or any other characteristic. Your avatar might appear to be identical to you, but it might also appear to identical to someone who has similar features to yours. The recent technology created by Facebook and Tel Aviv University puts an end to these problems and more. 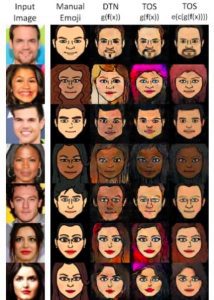 The only thing the user has to do to create custom Facebook avatars is take a picture. Next, the technology uses the actual face and a generated representation created by a feature identification algorithm. The two approaches act together as if they were two pictures of the same person. The results are compared and altered until the final avatar is as visually similar as possible. This means that the avatar perfectly resembles the user, down to the last freckle. The system can even update the avatar’s look based on the user’s changing appearance. You and your avatar would share the exact same skin color, bone structure, hairline, etc. The precision of the technology is unparalleled.

Facebook is not the only platform that this technology could work for. It is expected to appear on Facebook first since the company helped create it. The social media company has not yet announced when the feature will be available to users.

Personal avatars have certainly come a long way since the Mii. The days of manually creating inaccurate avatars will soon be over. Custom Facebook avatars ensure that the mini cartoon version of you will never suffer a case of mistaken identity again.