In a recent study at Connecticut College, researchers have found the scrumptious Oreo cookie snack to be just as addictive as cocaine, giving the expression “this ‘stuf’ is like crack” a whole new meaning. Neuroscience professor Joseph Schroeder and four undergraduate students used rats in two experiments to observe their behavior and brain activity when injected with drugs compared to when fed Oreos. 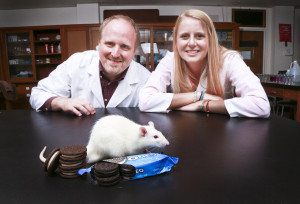 There was no surprise when researchers watched the rats avoid the rice cakes and run towards the Oreos, but what they didn’t expect was the brain activity from the Oreos. The Nucleus Accumbens is the pleasure center of the brain where addiction can be seen. When the rats were injected with Cocaine and when they ate the Oreo, this area of the brain was activated. What was surprising was that the Oreo activated more neurons in the rat’s pleasure center than the cocaine did. This observation shows that high fat and sugary foods are addicting to the brain in a similar process as becoming addicted to drugs, and possibly more severe! This raised the question of sugary and fatty foods, like Oreos, being more desirable and addicting than drugs like cocaine. The steps towards obesity follow a similar process and the neurological process towards drug addiction. 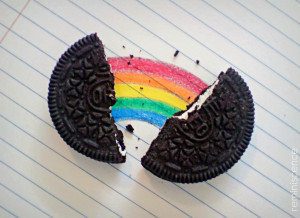 During a Fox News Health interview with Dr. Manny Alvarez, he begged to differ. The Doctor argues that the fact of food affecting the same pleasure center of the brain as drugs is no new news, however we “can’t bring food into the same equation as other chemicals”. He believes that the neurological effects of drug addiction and food addiction cannot be compared because someone can stop eating through “will, power…and reasoning”.

As a “sugar-a-holic” myself, I have personally experienced the mouth-watering desire for a sweet. Your mind is distracted, you cannot think of anything else until you obtain your guilty pleasure. You find yourself sneaking out of bed while your family is asleep and hiding empty tubs of ice cream under your bed so no one will know the severity of your problem. You know you should stop but the euphoria you feel is too great to give it up. I imagine this feeling to be similar to a drug addiction; lies, desire, highs and lows.

It makes us wonder if our parents have been giving us a sugar high, or a drug high.