Who has $100 to pay for a concert ticket? Many people definitely do not have the time or money to go through the hassle of trying to buy tickets at astronomical prices. A new startup called Concert Window is attempting to create a system that will broadcast live concerts over the Web. 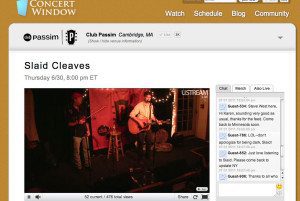 Concert Window would allow people to stay at home and either watch the concert live, or just listen to the audio from their home. Concert Window attempts to make it so that you won’t ever have to get up and go see a concert again.

Concert Window is also trying to keep the price low so that more people will be able to watch and listen in. The price for each concert would be $10 or less. Honestly, how can you beat that? You do not have to pay insane concession stand prices, deal with the mobs of crazy people, and you can sit on your comfortable couch to watch or listen to the concert instead.

According to Concert Window, the audio and video quality is so high that you will feel like you are actually at the concert. If you have a good sound system, it makes the experience that much better.
I know that some people might feel that this is ruining the concert experience, but if you still want to be surrounded by loud and screaming fans, you will still be able to due that if you want to.

Concert Window is simply allowing those who do not wish to be surrounded by chaos a chance to save money on their tickets and food, and to be able to relax at home.

This is not the first time the idea of streaming live concerts has happened. The problem has always been that venues do not want to put up the money for the equipment that was needed to do this sort of stream. Concert Window has changed all of that because once the venue gets the startup; Concert Window does all of the initial setup for that venue and the best part for the venue is that no production team is required to run this.

Concert Window has been able to stream 2,000 concerts with more than 1,500 artists and at 15 venues so far. This is only the beginning for Concert Window.