In the multi-faceted, ever-changing world of technology, social media is only a small part of this intricate system. However, many brands have noticed this small area’s power within marketing. Due to the technological world’s unfamiliarity with social media, any new techniques or ideas are considered fair game.

Although this Wild West of marketing has little to no rules nor regulations, concepts such as copywriting have been called into the social media debate. Specifically between Snapchat and Instagram.

Snapchat spearheaded the “story” idea when they released a feature to their social media platform that allowed users to post photos and videos that would last a total of 24 hours. Slowly but surely brands began to take notice of this feature and use it to post about flash sales and events to reach their consumers in a faster, cooler way.

Other social media platforms took note of this ingenious idea and began to find ways to imitate it, specifically Instagram. A little less than two months ago, Instagram released its version of the “story”. Instagram CEO Kevin Systrom went so far as to give Snapchat full credit for their idea; however, Instagram has gone a step further by allowing its users to mute any story they would rather not see. This was done because users tend to follow more people and brands on Instagram than on Snapchat.

As the two social media empires begin to emulate each other, brands have now put into question which platform is worth putting their marketing dollars towards. According to a recent review, Snapchat has over 150 million daily active users versus Instagram that has over 300 million daily active users. In total, Snapchat has over 26 million users while Instagram has over 100 million users. Interestingly enough, the average time spent on each social media is more or less equal to 20 minutes a day. 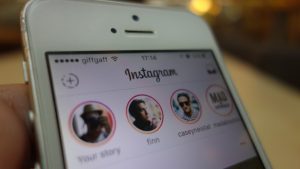 While each brand is unique and therefore their marketing spending varies, Instagram seems to be the overwhelmingly obvious choice when looking into social media buys. Stay tuned to see how all these changes may affect Snapchat.