Her husband refers to the leader of North Korea as “Rocket Man,” calls Hilary Clinton “crooked Hilary,” and belittles and demeans people through Twitter. Her goal is to end cyberbullying. First Lady Melania Trump announced she would focus her attention on the issue of cyberbullying during the presidential campaign. Since Donald Trump’s election she gave a speech at a U.N. luncheon and traveled to a couple of middle schools to talk to children about bullying; it is believed that she has not yet formulated a defined program for ending cyberbullying. Given the recent comments made by a Parkland High School shooting survivor, it was time to take a look at what First Lady Melania Trump has done for the complex issue of cyberbullying and determine if she will ever actually be effective at change, assuming she is unwilling to smash her husband’s phone. END_OF_DOCUMENT_TOKEN_TO_BE_REPLACED

Failing ESPN continues to tank as anchor, Jemele Hill, keeps her job in the midst of a Twitter scandal. Why is Hill’s job in question? The tweet, which has since been removed, claimed that President Donald Trump was a, “white supremacist,” and that his cabinet (which features a black man, an Indian woman, an Asian woman, and multiple Jewish people) was, “largely…white supremacists.” END_OF_DOCUMENT_TOKEN_TO_BE_REPLACED

We have all been there, scrolling on our Facebook timelines and came across some wild article. Unfortunately what happens from there is up to the reader. Some take what they read on the internet with a grain of salt and fact check, others not so much. Social misinformation occurs because social sites, especially Facebook have a well-established reputation. 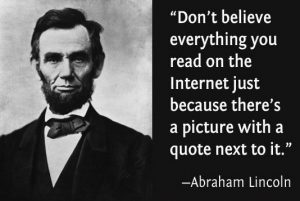 I know it’s one of the first places I go daily to find out what’s happening in the world. Facebook has trending topics, top news organizations and all my friends who I consider truthful sources of information. But in the wake of an especially confusing election season chock full of mudslinging misinformation, Mark Zuckerberg spoke out about how Facebook is going to combat fake news stories.

END_OF_DOCUMENT_TOKEN_TO_BE_REPLACED

The 2016 presidential election was anything but ordinary. This crazy election had polar opposite candidates, zealous supporters, and biased media networks. Social media was one of the most interesting facets of this election. Both Donald Trump and Hillary Clinton were extremely active across the big three platforms: Facebook, Instagram and Twitter. Trump even went so far to say that social media played the key role in his victory.

END_OF_DOCUMENT_TOKEN_TO_BE_REPLACED

How Facebook’s platform allows users to share their thoughts on the 2016 election.

END_OF_DOCUMENT_TOKEN_TO_BE_REPLACED

Kate Moss once said, “Nothing tastes as good as skinny feels.” This quote was one of the most popular memes of 2016. Young girls and women alike have posted and retweeted this as “fitness” inspiration. Unfortunately, this quote is not the only form of unwarranted, unhealthy physical propaganda; especially within the social media sphere. END_OF_DOCUMENT_TOKEN_TO_BE_REPLACED

How do you want to receive your news about the upcoming presidential election? You can watch the news and debates on TV, or you may read the newspaper for your daily update. Now, you can also turn to social media to learn more about it. As the election approaches, social media has been improving political campaigns.

END_OF_DOCUMENT_TOKEN_TO_BE_REPLACED

The 2016 presidential campaigns are in full swing, and social media improves political campaigns. Social media is an easy tool for candidates to get their message out there and find ways to reach larger audiences. As Campaign On says, “56% of Americans currently have a profile on a social media site… And with 22% of Americans using social media several times a day, it is no wonder that businesses, non-profits, and even politicians have begun to utilize social media” (http://campaignon.com/blog/political-campaigns/social-media-and-political-campaigns-what-are-the-benefits-of-social-media/).  Social media improves political campaigns by allowing candidates to show off their personality and their campaign.

END_OF_DOCUMENT_TOKEN_TO_BE_REPLACED

Presidential campaigns spend millions of dollars each year on radio and television ads, but for the 2016 election this money is a waste. Presidential Candidates must look to social media for rankings, free advertisement, analytic

More voters are receiving their news from social media and the 2016 presidential candidates are taking advantage of this medium. Social media is a tool for campaigns to reach out to Millennials and gain momentum in the polls and recognition in the news. Twitter has become imperative for candidates to use to gain the public eye and attention of potential voters.

END_OF_DOCUMENT_TOKEN_TO_BE_REPLACED 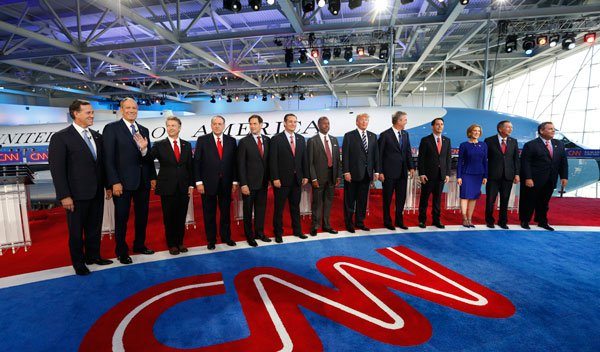 The candidates of the Republican Presidential Debate stand together after a combative, confrontational 3 hour dialogue.

Although titled the Republican Primary Debate, CNN’s lengthy Wednesday evening production was much more of a “he said, she said,” Real-Housewives catfight-esque, combative communications performance than a Presidential deliberation.

Taking place at California’s Ronald Reagan Presidential Library, CNN hosted a whopping 16 Republican candidates for what resulted in more of a confrontational therapy session between the “cool kids” rather than an evenly distributed discussion amongst all of the candidates. And yet, the prime time debate averaged 23.1 million viewers, making it the most-watched program in CNN’s history. Is this statistic telling of the type of communication that attracts a majority of our nation’s population?

CNN’s combative questioning technique was designed to spark conversation, typically controversial, between two candidates in regards to comments that one has said about the other and vise versa. As the inquiries and accusations were being responded to, the network would publish the responses via Twitter, which only elongated the “he said, she said” conversation via social media. On the contrary, professor and CNN Political Analyst during elections Dr. Rita Kirk, noted that although combative, the debate technique forced candidates to be confrontational in a public forum. By forcing candidates to face the criticism that was made both by them and against them, it acted as a “check” on held them and a catalyst for accountability, which may have been the appeal to the American public.

According to Microsoft cofounder Bill Gates, robots do it better. The infamous computer programmer claims that advancing software automation could lead to technology replacing humans in the work force meaning that robots could steal your job.

Business Insider reports that Gates spoke at the American Enterprise Institute think tank in Washington, DC last week speaking about how governments and businesses need to prepare for a future where lots of jobs will be done by software and robots, resulting in mass unemployment.

“Yes, robots really are about to take your jobs,” Gates said. “Software substitution, whether it’s for drivers or waiters or nurses… it’s progressing. Technology over time will reduce demand for jobs, particularly at the lower end of skill set… 20 years from now, labor demand for lots of skill sets will be substantially lower. I don’t think people have that in their mental model.”
END_OF_DOCUMENT_TOKEN_TO_BE_REPLACED

Obama on Between Two Ferns for Zach Galifianakis’s Funny or Die show to promote enrollment of Affordable Care Act. 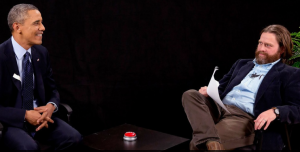 A surprisingly witty and snarky Obama kept Galifianakis on his toes throughout the interview. An example of their dry humor was when Galifianakis said, it must “stink” that Obama couldn’t run for a third term. He quickly rebutted with,

“If I ran a third time, it would be like doing a third Hangover movie…didn’t really work out very well did it.”

These sharp and comedic zingers weren’t the only points to come out of the show. Obama strategically and effectively communicated the Affordable Care Act to an audience he has been desperate to reach. Approaching the Millennials through an age appropriate, popular online platform like famous Funny or Die, is genius.

Like Obama on Between Two Ferns, to achieve your target audience you must:

These steps are crucial. The success of these steps was proven when following Obama’s appearance, there was a healthy bump in the number of those who enrolled in the Affordable Care Act.

Watch out NSA, the Internet is back for round two with “The Day We Fight Back” — an online protest packing one hell of a punch ready to knock out mass government surveillance worldwide.

The Day We Fight Back — Online protest.

A coalition of activist groups, companies and online platforms launch an online protest against government surveillance in a mobilization dubbed “The Day We Fight Back”.

END_OF_DOCUMENT_TOKEN_TO_BE_REPLACED

The United States has dropped 13 places to a dismal 46 on the World Press Freedom Index. 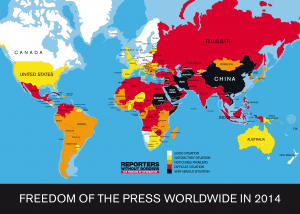 Reporters Without Borders annually ranks countries based on how they maintain freedom of the press. In a ranking of 180 countries, the United States now stands at number 46. Public opinion can best be summed up by The Atlantic, “At least the birthplace of the first amendment managed to come in one spot ahead of Haiti.”

END_OF_DOCUMENT_TOKEN_TO_BE_REPLACED

It looks like the Democrats are gearing up to keep net neutrality alive. After the D.C. Circuit Court of Appeals struck down current regulations on net neutrality the donkeys are kicking back with the Open Internet Preservation Act.

END_OF_DOCUMENT_TOKEN_TO_BE_REPLACED

It may sound like a government conspiracy, but you would be surprised to learn that the government has been planning to imprison the homeless for years.

END_OF_DOCUMENT_TOKEN_TO_BE_REPLACED 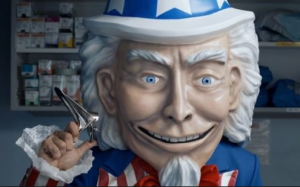 END_OF_DOCUMENT_TOKEN_TO_BE_REPLACED

Ever run into a secret-service agent on your way to class?

..Well, that’s exactly what happened to me this week on campus. Southern Methodist University has been a bit more chaotic than normal thanks to the grand opening of the George W. Bush Presidential Center.

END_OF_DOCUMENT_TOKEN_TO_BE_REPLACED 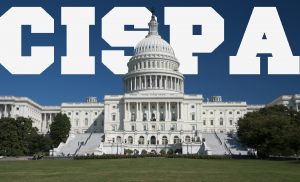 In a session closed to the public, the House Intelligence Committee approved the controversial Cyber Intelligence Sharing and Protection Act (better known as CISPA) by an 18-2 vote. The bill will now appear in front of the House of Representatives next week.